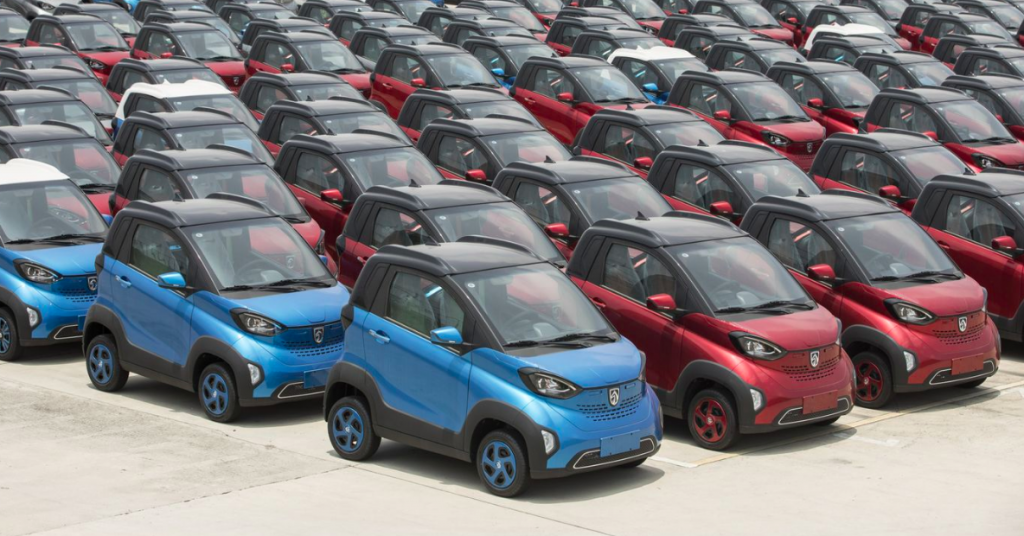 Electric vehicles are getting more and more attractive thanks to not only their improved performance, but also the tax incentives given by various governments help reduce the cost of owning an electric car. These tax incentives are designed to make the total price for getting into an electric car for early adopters, relatively cheap and affordable for most people. Since the Chinese government adopted a policy offering up to $12,000 in subsidies for buying an electric car, the country has seen Ev adoption explode and has been hitting record sales of electric car, far surpassing any other country or region of the world. Here are the absolute cheapest electric cars on the global market today.

General Motors in a partnership with Shanghai Automotive Industry Corporation have launched their first all the electric car for the Chinese market called the Baojun E100. The E100 is a small two-seater electric car inspired by the design of the Smart 42 electric car. It’s powered by a 29 kW electric motor which delivers 81 pounds foot of torque, allowing the Baojun E100 to reach a top speed of 62 mph.

It’s lithium ion battery pack provides 100 miles of range on a single charge. Inside the vehicle, the dashboard is equipped with a 7 inch touchscreen display and wireless connectivity. It also comes with a number of safety features designed to give you more confidence in taking this tiny thing on the road. The car cost $5300 after government subsidies.

The Chinese automobile manufacturer Great Wall Motor is planning to launch its electric car Ora R1 in India and expand its network. It is aimed at being one of the cheapest electric vehicle available in the world with a price range of $8600 to $11000.

The Ora R1 will have a maximum EPA rated range of 351km, and it runs on a 35KW motor. With a 351km range, it can be compared with other relatively cheap electric cars on the market that have an average range of 270km and a maximum range of 452km on a full charge like the Hyundai Kona.

India has a target to sell 10 million electric cars in 2030 alone, and the major automakers have already started to hit the market with all electric models. Tata Motors which has a very strong network of associated companies including Jaguar and Land Rover, sells it’s vehicles in more than 50 countries. The company which already went electric by offering electric versions of some of it’s gasoline powered cars, recently formed a joint venture with Jayem Automotive to produce the cheapest electric car in India called Jayem Neo.

It is a four seater electric hatchback that can go up to 200 km on a single charge. The Jayem Neo electric car will be available initially for the the Indian market with a price of around $7000.

Renault which has the largest range of electric cars on sale in Europe, can now also add the title of having the cheapest electric car in the list in the continent. The Renault Twizy is a four wheel two-seater that’s a lot of fun to drive. The eco-friendly electric vehicle is capable of achieving an EPA rated 60 miles of range on a single charge and can reach the top speed of 50 mph. The Renault Twizy has a starting price of about £7000. However the battery comes with a £45 per month subscription adds another £540 annually to the cost of owning a Twizy.

If you have seen Joe exotic, you might’ve come across the scene in the shot below. This is Kandi Coco that starts at $10,599. However after all the tax credits, Joe ended up getting it for under $1000. Candy is coming to America and orders opened up in August 18.

Kandy Vehicles is a Chinese auto manufacturer which has a joint venture with Volvo who owns Geely. The mission began in 2019 with the goal of to bringing the hatchback to America by the end of 2020. Starting at $13,000 and in some states you may be able to get this car down to $10,000 with added tax incentives.

One of the two hatchbacks is the K27 starts at $20,490. But with the added $7500 tax credit, it would make this car about $2000 cheaper than a 2020 Chevrolet Spark. The Kandi K27 vehicle has a top speed of 63 mph in an EPA rated maximum range of 100 miles which is similar to what Americans were used to with the initial Nissan Leaf.

The second model is the Kandi K23, and this is a larger model which is odd because named with a small number as K23 versus K27. The price starts at $29,999 before tax credits with a 62,000 miles or 8 year warranty. It looks like a more modern car and is actually referred to by the company as a “small SUV” as you can see from design. The top speed is 70 mph with 180 miles range per charge. The Kandi K23 is just a bit smaller than a Chevrolet Bolt and a bit cheaper than the 2021 Mini Cooper SE which by in comparison only gives you 110 miles per charge. Also for context, the Nissan Leaf starts at about $32000, with 150 mile range.

What I am mostly concerned about when it comes to the Kandi K23 is it’s 70 mph top speed. In 2018 Kandi but it’s Texas-based ATV importer SC Auto Sports to handle the distribution of these little vehicles. The tech on the K23 center console is close to bare bones with just bluetooth audio. It also comes with a 10 inch touchscreen display, backup camera, door and front airbags, and antilock brakes. Both cars have under 30 horsepower in the front mounted motors.

The Kandi K23 weighs 2954 pounds which is quite a lot for such a small car. The K27 has a charge time of seven hours and the K23 has a charge time of 7.5 hours with a 240 V charger. The company says it’s working on adding quick charge capability to its cars by next year. Chief executive of Kandi America Johnny Tai claims that they are on a mission to make electric cars accessible for all and they’re starting an “EV-LUTION” that would allow anyone to afford a reliable high-tech electric car. That sounds very promising because most American cars that are affordable start at around $20,000.

You won’t be doing any drag races in these slow pokes but you will get what you pay for. Kandi is an unproven brand with unknown reliability. So is it worth buying this overused EV? I don’t yet know the answer to that question because these cars can barely go on the highway with top speeds of only 60 and 70 mph. They are more suited for urban life. I guess you can go on the highway but you’ll have to hug the slow lane which is not terrible but I think I would rather buy a used Prius or something. However since it’s a Chinese product, parts may be quite cheap when it comes to repair or fixing. Comment below and let me know your thoughts on these cheap electric cars.