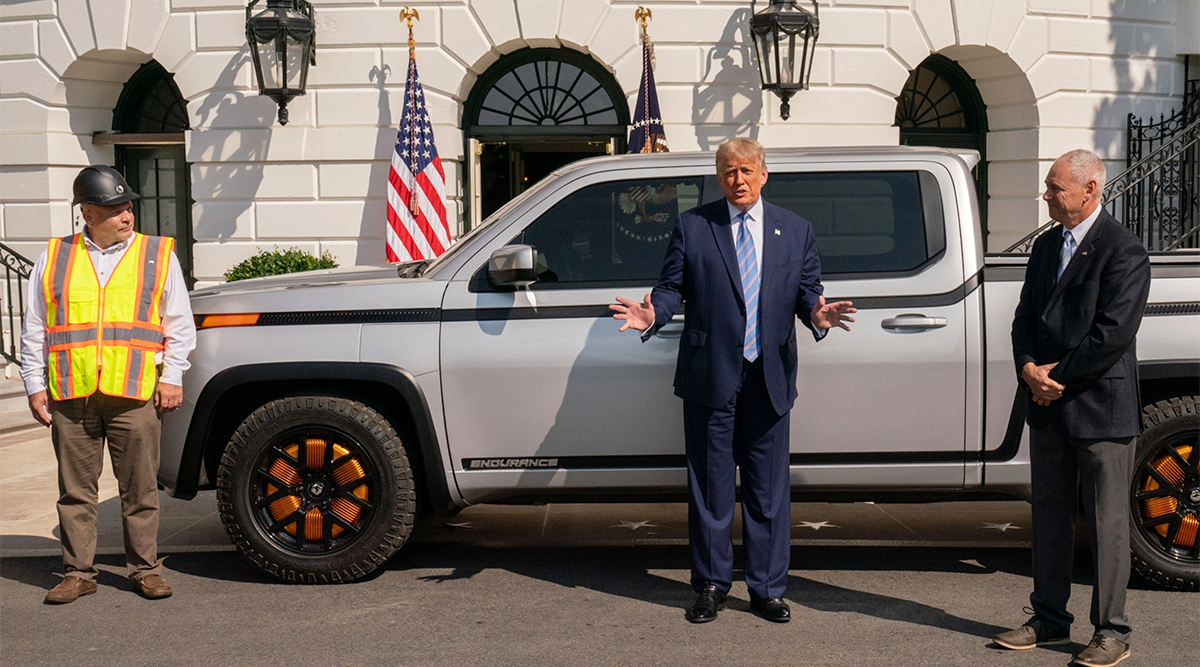 The world was shocked Thursday night to find out that President Trump and First Lady had tested positive for COVID19 along with a number of White House staffers. As a result, Republican Ohio Sen. Rob Portman and executives from Ohio-based Lordstown Motors underwent coronavirus testing on Friday because just days prior, they all visited to the White House.

At the event, Trump surveyed the aptly named Endurance electric pickup truck produced by the new entrant into the EV race on the South Lawn of the White House. The event was also attended by two members of Congress and three representatives from the Lordstown, Ohio, manufacturer including its CEO Steve Burns.

The Lordstown Motors CEO showed President Donald Trump the Endurance pickup truck while Sen. Rob Portman and White House senior trade adviser Peter Navarro looked on from a distance that seemed far less than the CDC’a recommended 6 feet. Take a look at the photo below.

Although the event was held outdoors, you can see from the ohotos that there was no social distancing going on. I suspect Lordstown CEO and other executives were tested before being granted entrance into the White House grounds. However you can clearly see that the president and other officials in attendance did not wear masks during the event. Trump praised Lordstown for boosting the local economy at the White House event, which took place just one day before the president participated in a debate against Democratic presidential nominee Joe Biden.

Portman was tested for the virus on Friday and his result was negative, a spokesperson confirmed to Fox News. The Ohio senator also sent well wishes to Trump shortly after the president disclosed that he had tested positive saying “Jane & I send our best wishes to President and Melania Trump for a speedy recovery,” Portman tweeted after Trump’s announcement. “I’m glad they immediately began to quarantine and I hope everyone will support their recovery by continuing to do their part to slow the spread by wearing a mask and practicing social distancing.”

Upon news of the President’s diagnosis, a spokesperson for Lordstown Motors said that executives will be tested immediately. However the results were not immediately announced. The automaker could not be reached for further comment.

In an update on Friday afternoon, White House physician Sean Conley said Trump “remains fatigued but in good spirits.” However, the president was soon taken to Walter Reed hospital as a precautionary measure.

“President Trump remains in good spirits, has mild symptoms, and has been working throughout the day,” White House Press Secretary Kayleigh McEnany said in a statement today. “Out of an abundance of caution, and at the recommendation of his physician and medical experts, the president will be working from the presidential offices at Walter Reed for the next few days. President Trump appreciates the outpouring of support for both he and the First Lady.”

Now I understand that many in this country have seized upon this opportunity to gloat and wish a negative outcome on the President. However it is important to understand that because the President and his administration has shown a complete lack of empathy towards the suffering and death of over 200,000 American citizens from COVID19, it’s still does not make it right to ever wish ill on anyone especially in their time of need. So I will continue to keep the President and First Lady my prayers and wish them a full recovery.